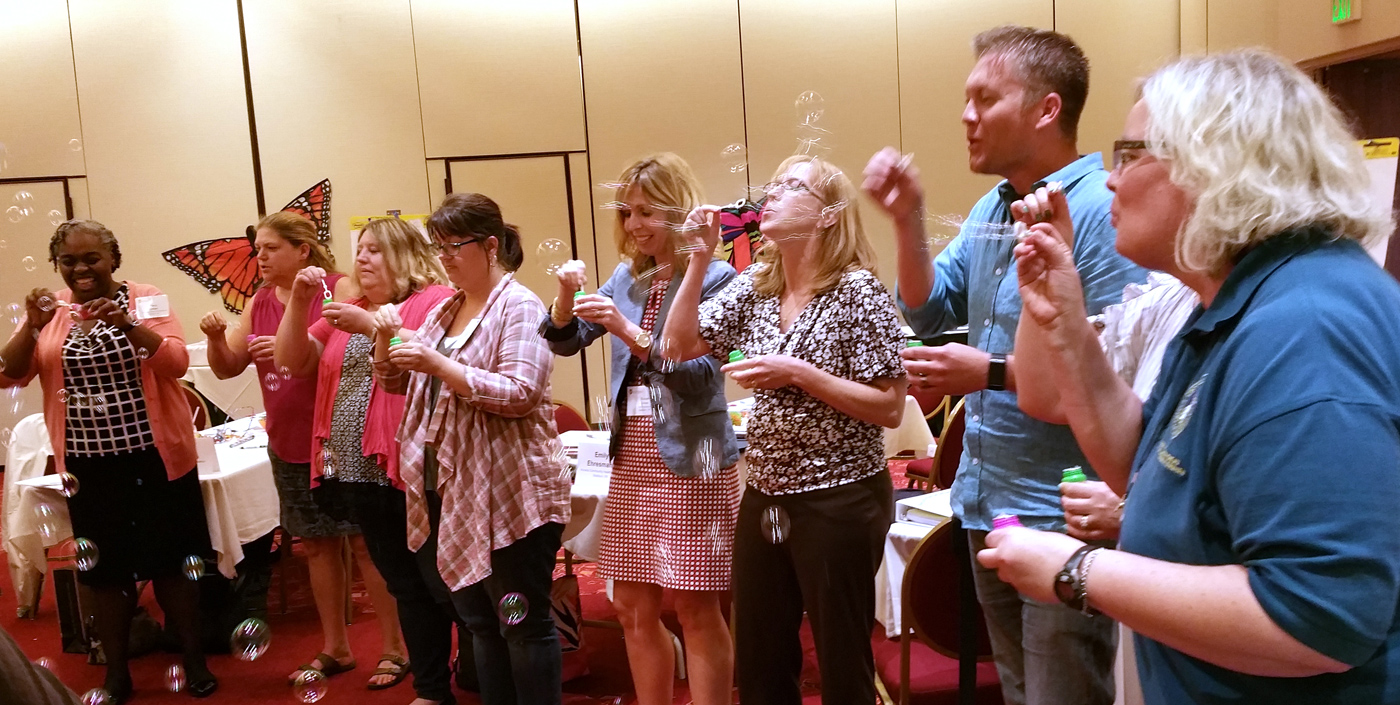 On March 30, 2020, Posted by Deborah , In curriculum design, With Comments Off on Tip #816: A Satisfying Challenge

I shared in last week’s Tip that my partner and I were very nervous about conducting a workshop for 122 participants when it had been designed for 30 participants. Our primary worry was whether or not we would have enough time for the participants to work in small groups and then debrief their work. All we had were two hours.

Well, the workshop on Motivational Interviewing for SHRM went as scheduled. There were approximately  100 participants, either seated at tables of seven or seated in additional rows of chairs on the side of the room.

My first concern, about a long introduction, was forestalled by speaking with the person who was going to make the introduction and indicating what she should read from our bios. She did it perfectly.

It turns out that there was a speaker before us, so we could save some time by dispensing with the activity having people introduce themselves to their neighbors, assuming that had occurred with the first speaker.

The pop up activity only elicited one response. I rewarded her with a superwoman duck. Her answer had been so on target, offering more ducks for more pop ups was unsuccessful.

My second concern, about my co-presenter’s time management, was a nonstarter. He kept his comments brief and to the point, well within his allotted 15 minutes.

Then came time for the “small” group activities. I did divide the room into fourths and assign two different items to each quadrant for each activity. We relied on volunteers from each group to report their results, which worked relatively well.

It turned out that we still had sufficient time for the participants to break into triads to apply what they had learned and conduct a 10-minute motivational interview. This entailed having the individuals seated in the rows join the participants at the tables where there were extra chairs. The activity seemed to work very well, because there was a lot of conversation and occasional laughter at the tables.

The goal of these brief motivational interviews was to help someone who was considering a change to discover for himself or herself how to initiate that change, rather than telling them what to do. We had the interviewers ask a scalable question to ascertain the interviewee’s commitment to and willingness to change: On a scale from zero to 10, how important would you say it is for you to make this change, if zero means “not at all important” and 10 means “the most important thing in my life right now”? Based on the interviewees’ answers to this question, many of the triads reported success.

We had time to debrief volunteer interviewers, interviewees and observers. Some of the interviewers noted that it was difficult not to fall back into giving advice and telling people what to do, since their role as human resource managers was generally to solve problems and/or to give pep talks.

Some of the interviewees said they felt free to come up with their own solutions, which was a good feeling. And some of the observers mentioned that one of the most important elements of the mock interviews was the open-ended questions. They also remarked that they saw other O.A.R.S. elements in evidence besides the Open-ended questions, including Affirmations, Reflections and Summaries (both in the middle and at the end of the interviews).

What was most gratifying for us was the report from one observer that the interviewee had had a very sensitive change that she was (surprisingly) willing to discuss and ended the interview having made up her mind as to what she was going to do to resolve it. What an amazing accomplishment for a 10-minute motivational interview! It made all of our stress and worry up to the session well worth it.

As a first time co-facilitation experience, my partner and I played off each other very well and the workshop format worked perfectly. We would have preferred a smaller group, with more opportunity to debrief each small group rather than a representative portion of the groups. But the organizer for the program was very pleased with both the content and the format, so we achieved our goal. Hurray!